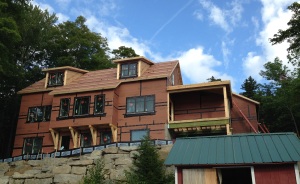 With time running out and their prospective home site building permit deadline fast approaching, a couple from Iowa was in a race against time. The 3,000 SF custom home they wanted to build on a steep, challenging site on a southern Vermont lake had to be designed and substantially completed by mid October 2014—and it was already late February.

To make matters worse, without the building documents in hand the prospects wouldn’t be able to combine their (higher-rate) construction loan with their (lower-rate) mortgage to shorten the former and avoid two closing costs—and besides, they could not close without knowing if they could complete their home before the existing build permit expired. 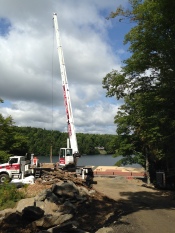 With just a little over seven months remaining to build, the couple turned to Bensonwood. They were familiar with another home we built on the same lake, and as long-time fans of the PBS television series, This Old House, they had seen Bensonwood featured on the program and thought our processes might hold the key to streamlining the process.

After two visits to our facilities, the husband put his cards on the table:

“If you can build me the house, I’ll buy the land next week!”

We accepted the challenge. Within a few days the Schematic Design contract was drawn up. Next, architect Randall Walter, landscape designer Tim Calabrese and the owner all met to walk the build site in snowshoes. The landscaper was brought so early because setbacks on the property were so tight, and the property so steep, site work and landscaping would need to be completed first as there would be no room to bring in heavy earth moving equipment once the home was up.

From there, the Bensonwood design and engineering teams finalized plans for the custom home in a few months and detailed construction documents were presented to the lender, who was then able to approve a combined construction and mortgage loan. 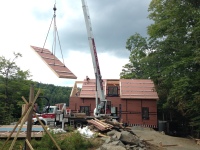 With all the pieces in place, the home’s shell was erected within a week’s time in August by our raising crew, headed by job captain Iver Bowen, and site supervisor Mark Williston. The completed home will be ready by October—a little over seven months after the client first visited Bensonwood.

Randall Walter summarized, “Normally this process would take 12 to 18 months, but in this case, the stars aligned with the clients, their banks, the subcontractors, our suppliers, our schedule and the weather, so we were able to get everything done remarkably quickly.”